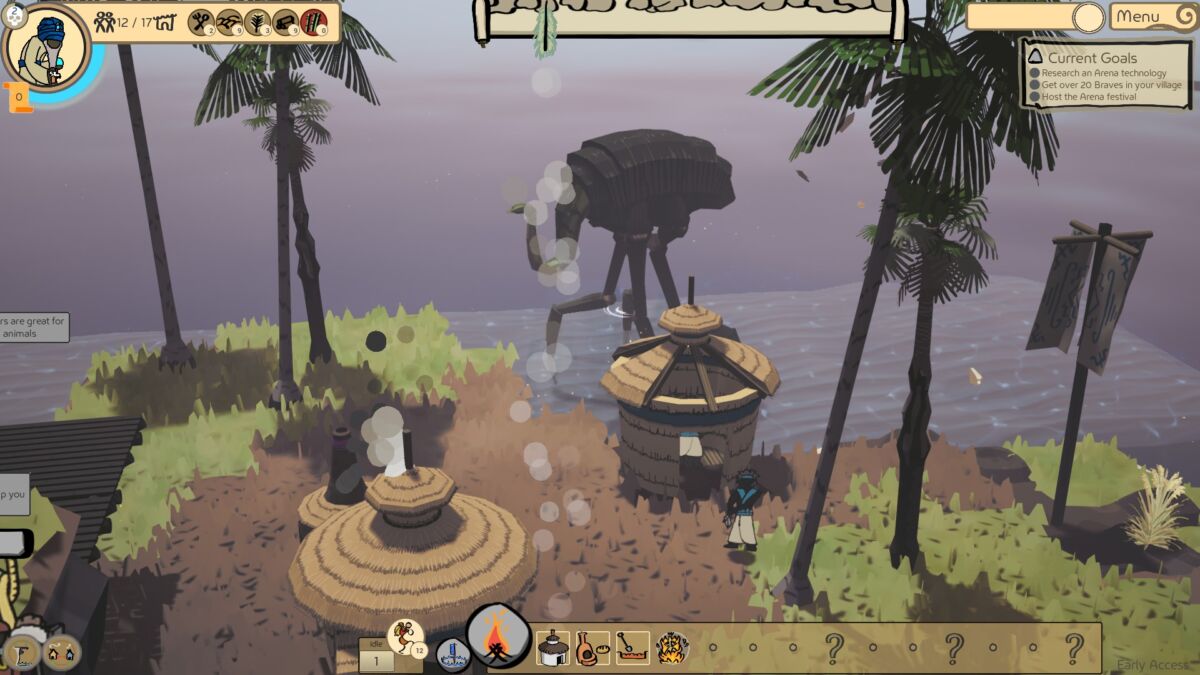 Even the most humble sources can provide clever and innovative gameplay ideas. The relationship between environment and human development, which is the city builder subset in strategy games is exciting, holds great potential for creative mechanics. What does Erik Rempen’s Kainga have to offer?

Kainga is small-scale tribal village builder. It has a roguelike metagame and mission structure. This indie game’s highlight feature is its focus on adaptable strategy and the construction of flexible settlements that can respond to different weather conditions, terrain features and wildlife. Kainga’s current Early Access state has a strong conceptual game core and a bright future.

With its colorful, vibrant, and minimalistic 3D geography, the game stands out from other cities builders. It also provides quick information that is easily accessible to the player. Each set of challenges has its own layout and visual flair. This makes the environmental design stand out.

Although the menus and maps and unit models have a more simple 2D style, it works well with the clear geography. All of the creature designs, including Walker and Trudger, are interesting and appropriately outlandish. This gives Kainga its own charm. It’s as if it represents a mythologized historical past, or a completely separate fantasy land. While there is some visual woes when the creatures travel across the land, they can also get stuck on difficult terrain features. However, overall, their behavior helps to ground Kainga.

Kainga still has a lot of content in its current state. There are three functioning biomes, a number of missions and challenges, and many that require different strategies and tactics. Kainga’s metagame offers a wealth of technology that can be unlocked, which rewards experimentation and exploration. The roguelike aspect of unlocking new items and structures keeps each playthrough fresh. Additionally, the randomized inmission technology system keeps players creative when it comes to dealing with the terrain.

Apart from the standard techs used by other city builders such as military and housing, Kainga’s village development has an edge because of the many clever and bizarre gadgets that players have access to adapt to various weather conditions and changes in the environment. One of the most inventive is a cloud popper balloon which dissipates rain clouds. Another is a saddle and rig that can be built using the backs of tamed animals. Kainga offers players an endless number of options to optimize their game.

Although Kainga’s gameplay concept is impressive, the game could use some tighter pacing and technical aspects. Although Kainga has some technical issues like unit pathfinding and combat controls and some quest progression bugs are notable, the developer has already shown that they can work quickly and that they will address these issues promptly. They were able to fix a mission rewards bug that I discovered during my playthrough within one day.

Kainga’s biggest problems are its AI behavior and the level of difficulty. Although the game has a good number of missions, many feel too easy and leave you feeling bored or unfulfilled. Multiple times, I felt that the mission ended just as I was beginning to feel the rhythm of building a self-sufficient village. This is because it was so easy to accomplish the mission objectives.

Kainga’s awkward mission pace is certainly not helped by the passive NPC AI. Players will interact with two villages rivals in any given mission. This is done through a simple diplomacy system. You either pay tribute to the village or attack them.

In-game instructions state that NPC villages can grow and develop if they are given the required resources. However, gameplay doesn’t clearly show this. The AI will simply send a party of Braves to your central hearth in an attempt to knock out the village Thinker, which is the scientist and head for the village. However, they won’t use any innovative or difficult tactics to defeat the player’s defenses.