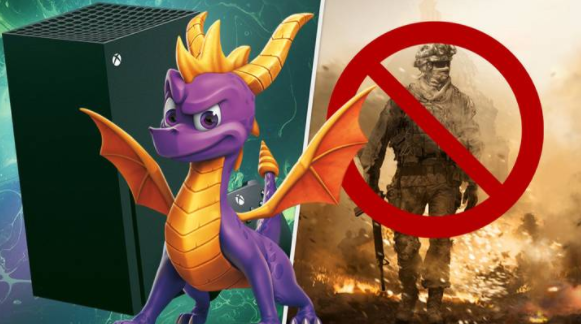 The Microsoft/Activision Buyout should end annual call of duty releases

The Microsoft/Activision Buyout should end annual call of duty releases

It’s bloody hell. After a short lunch break, I return to find the world gone mad-town banana pants. Microsoft purchased Activision Blizzard at a staggering $68.7billion. This means that the Xbox Game Studios umbrella now includes the likes Call Of Duty and Overwatch and Diablo, Diablo and World Of Warcraft.

This is undoubtedly another major win for Team Xbox and a very sad bit of news PlayStation. Microsoft now owns an incredible number of juggernaut franchises, thanks to this acquisition and the Bethesdaacquisition in 2020. It could be a formidable Smash Bros competitor at this point. I can recall when Microsoft’s largest mascot was Car from the Forzagames.

This latest acquisition raises many questions. Call Of Duty will now be an Xbox exclusive title? Will Halo Infinite include Spyro as an unlockable skin? Will Phil Spencer fire Bobby Kotick, Activision CEO, from the cannon and into the heart of a dying Star like he deserves

We don’t know what the future holds for now. It’s always fun to speculate about the future. IIthas become clear that Activision Blizzard is rotten at its core. The Microsoft buyout can be a positive step towards long-term changes in recent months. Start by firing Kotick.

Activision’s Microsoft leadership has been my greatest wish. I hope the annual Call Of Duty releases are finally put to rest. Too long, publishers’ most profitable franchise has been preventing talented developers from doing everything else.

Toys For Bob was a passionate studio that developed the Crash Bandicoot4: It’s About Time. Last year, the Call Of Dutyteam was formed. Activision decided to give us brighter, more colourful, and more inventive 3D platformers such as SPYRO4. Instead, they were playing a supporting role in yet another battle royale.

Raven Software, Infinity Ward and Treyarch have been stuck in an endless cycle with Call Of Duty releases for more than a decade. Given the current state Warzone and Modern Warfare and Vanguard, it’s obvious that the churn has started to burn.

You can now take annual Call of Duty releases off the board and open up a whole new world. It’s amazing to think that Microsoft and Activision have the best studios in the world, all of which can take from an ever-growing list of beloved IP.

GAMINGbible has allowed its imagination to run wild in the twenty minutes since the news of the merger broke. Let Toys For Bob make a new Banjo Kazooie game! Imagine what Rare could do with a new Spyro! Treyarch can play in the Halo universe by creating a new ODST story. Or, – this is my personal dream pitch! – Playground Games can finally make Tony Hawk’s Underground 3.

Although these pitches may seem like wild fantasy, they are not grounded in reality. Call of Duty is the mostinteresting aspect of Microsoft’s acquisition of Activision. The best thing we could obtain from this acquisition was a bunch of developers who don’t have to worry about creating a new FPS every year.

Activision has been exploiting and burying its talent for far too long. I hope Microsoft will address this issue in the future. We don’t have to play Call Of Duty every year. Activision is so much more than just shooting shooty bang bang troops. Microsoft is my favorite right now.

Again, Bobby Kotick is my emphasis. Cannon. Dying star. The rest will come. Naturally, I hope…