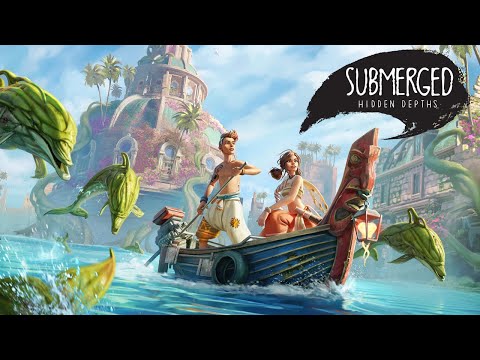 Submerged: Hidden Depths follows 2015’s Submerged by Uppercut Games. This game has been available for quite some time. It was originally released in 2020 as a Stadia exclusive. The game is now available on PC and consoles.

Returned players will be reunited as Taku and Miku explore a new city and try to restore its beauty and undo the damage which nearly cost it.

The game continues from its predecessor, with a post-apocalyptic world that has been devastated by massive flooding and the rise of an entity called the Mass. The world is no longer the land, cities and trees it was before. It has become a huge ocean with only a few buildings that can still be seen above the surface.

The story centres around Miku, a girl who has been infected by the Mass and Taku, her brother. The pair explores the few structures that remain above the waves together. Miku uses her connection with the Mass to try to restore Seeds that are corrupted. This transforms the lush greenery into a sinister Black Plant, which strangles everything still standing. Players will discover diary entries that tell the story of the world as they progress. These snippets will become a coherent narrative over time about the events that led to the creation of the world we see today.

Although the story is intriguing, it doesn’t provide a compelling reason to continue. It’s more of a distraction to your natural desire to explore the world that’s being presented to you. This is a deliberate decision by the developers to keep the game relaxing and easy-going, without any sudden twists or turns that could create drama. The story isn’t the main focus of the game, but there are many interesting stories to be discovered. Submerged’s world is not like other titles that have unclear narratives and no real answers. Instead of following the same pattern, Submerged’s world benefits from clear storytelling when needed.

This last point was what I found most comforting as a gamer who plays mostly for the stories. It’s not a game that tells a complicated story. That’s fine. However, it’s comforting to know that the designers had a clear vision and put the effort into delivering it.

It is not new to games that cast you as a single survivor or a member of a small group in an unknown ocean. There are many alien oceans to explore, starting with titles such as Subnautica. Submerged is another game in this series, but it does offer a unique experience with its setting.

Miku uses her connection with the Mass to retrieve corrupted seeds

The most notable of these features is Submerged: Hidden Depths’ emphasis on relaxation. Submerged is not like other survival games that take place in the same environment. Jump mechanics are absent and ledges cannot be crossed by handholds or lifts. It creates a safe and enjoyable game world. Only the threat to the player’s safety is the possibility of losing a collectable that they will have to return later. The focus is on exploring and enjoying the beautifully crafted environments.

These collectables play a significant role in encouraging this focus. These collectables can be found in the ruins as well as the ocean, and offer boat upgrades, relics and cosmetic items. These are not necessary for the story to move forward, but they can be a great incentive to explore every area of the map regardless of its importance.

The lighting system is one of the most striking features of the game’s visual design.

The mechanics are basic, just like the story. It is strange that an exploration game does not have a jump function. It took me a while to notice its absence in-game. However, it does make the game much easier. While Submerged is not a good choice for anyone looking for a challenge it perfectly suits the overall tone of the game.

GRAPHICS AND AUDIO: A BEAUTIFUL ENTRY

Submerged. Hidden Depths’ greatest quality is its visual, audial design. It is a delight to explore the world, and it is breathtakingly beautiful at all points. The world feels grounded in its own fantasy. Broken masonry is tossed into the sea as you walk by, and flotsam is scattered across the waves. As you try to find new animals and views to enjoy, the simple act of walking around can be a very attractive prospect. This is a motivational force in an otherwise quite laid-back story progression. Completing world puzzles slowly heals corruption that has overtaken the world, leaving behind flowers and greenery.

One of the highlights is the Remnants found throughout the ruins. These figures, which resemble long-dead people, react to Miku’s presence. They become more alive as she approaches them. The developers were able to tell many tiny stories through them: Miku approaches them and they start running. Others look behind them in horror at an unseen threat. Another raises its arms to defend against the falling building. The most striking of these are the ones that appear to turn around and look at Miku while she is getting closer. These Remnants have no purpose other than intrigue and are not intended to be used in gameplay.

The stories of the Remnants of people who were savoured by the Mass are their own.

A similar polish is applied to the audio. The majority of the game does not have any dialogue, even though Miku occasionally speaks. Instead, the game’s soothing soundtrack is all that players hear. The only sounds that interrupt the experience are the sound of waves and footfalls or the mysterious, sinister chiming from the Remnants. Submerged is a relaxing experience that promotes itself as such. It is subtle and discreet, but it works well with the tranquillity of the world that you are exploring.

These design elements were what kept me playing the game long after I had lost interest. Both the story and the gameplay have been deliberately stripped down to give Hidden Depths its relaxed atmosphere. Although that might normally be a problem for me, it was absolutely successful. It was a comforting pastime to just spend time in the game world, even without any goals.