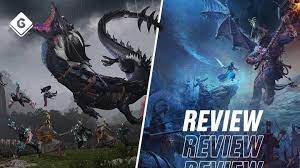 Total War: Warhammer III is now available on P.C. This hybrid turn-based strategy and real-time strategy game from Creative Assembly are general. This epic conclusion to Total: War Warhammer’s series lets you choose from seven factions. Is it worth the effort? Check out the review to find our verdict!

Total War, Warhammer III is charged onto your P.C. Creative Assembly developed this title, and it was published by Sega Total War. Warhammer III concludes the Total War trilogy. This tactical title is a titanic tactical title. You will be playing as one of seven different races in the fight for the Forge of Souls. They are not the only threat that you see.

Since the first announcement, I’ve been anticipating this release because I am a huge fan of Total War and the various Warhammer Series. It has been worth the wait for me, I must say. The game has its flaws. Some bugs and strange gameplay quirks can make the game frustrating (maybe unintentionally) at times. It’s fantastic fun overall for many reasons. Let’s now get to the review.

Total War, Warhammer III takes us back to the world of Warhammer Fantasy Battles. We return to The Old World. It’s sort of. The action this time is more focused on the north in the Lands of Kislev, Chaos Wastes, and, for the first time in series history, to the far east in the Lands of Grand Cathay. There are seven factions you can choose to play as in this title. Each section has its sub-factions with its storylines and agendas.

It would take a lot of time to go through all the stories for each group. The storylines of each faction follow the same structure. Each group seeks Urson’s power and must set out on a quest for the souls of four princes of daemons. Then they will need to use this power to guide them to The Forge of Souls, where Urson is. The storyline is well written, and there are some excellent cutscenes.

If I’m being honest, I feel that there is a significant disconnect between the storyline of the leader you play and the overarching story. The storyline and cutscenes that make up the overarching story are intended to be universally applicable to all factions. You will only see your leader in scenes at the beginning and end of the campaign. They are not featured in any other settings. They are not mentioned at any point in the story, and neither is yours.

This made me feel like I had little to no influence on the story. Yes, there was a scene where our main villain shook their fist and said, “That darn Katarin!” Although it might not sound like the villain, my actions would still feel impactful. It would have been a great idea to put the players’ characters in a scene with Urson or our villain. Total War is very narrative-heavy for Total War titles. I find it odd that there is a disconnect between the central storyline and the personal stories. This is especially true when considering how well the narrative was handled in the prologue campaign.

The prologue campaign has almost every aspect best written and implemented in the game. It is probably the best tutorial in gaming history. The tutorial explains the basics of the title in an almost ideal way. It also provides a unique storyline that’s beautifully written, animated, and acted. Even if you don’t have any previous experience with the Total War franchise, I recommend it highly. It is one of my favorite short stories I have ever seen in a video game.

Although it’s not perfect, the story is what you expect. However, I feel the illusion of player influence in the narrative is a lot of unnecessary teases. However, the misconception that my actions mean something here is more significant than what I got in the primary campaign.

END OF THE TIMES

Even with all this said, the storylines in Total War III are great for what they are. They are huge in scale and have great production values. It will be enjoyed by many. Fans of the Warhammer series will especially enjoy it. Its execution is the only problem. Its execution is its biggest problem.

It is the cause of all the game’s problems (aside from the bugs). Once you’ve completed a character’s storyline, there’s no incentive to go back. You might decide to stop playing through a campaign after you have completed it. A narrative-free sandbox mode would be a great idea, given the solid gameplay. When writing this review, I could not review the entire game. Those are the things I am referring to.

Total War is a mix of Turn-Based-Tactics/Real-Time Strategy. In the main overworld, you move your armies around the map, upgrade settlements, and more in a turn-based game. The game switches to the real-time mode when a battle begins. You can command your armies. The core gameplay is the same as in previous iterations: the Total War series and the Total War Series.

This is not a criticism. “If it ain’t broke, don’t fix it,” as the old saying goes. The title is similar to Total Wargames, but many quality-of-life tweaks make it more enjoyable. The core gameplay loop, which includes improving diplomacy and overhauling siege wars, is perhaps the best it has ever been. The A.I. is not perfect. The A.I. can still be a bit stupid sometimes, and there were many bugs when the title launched, but these things can be fixed in time. Although it’s not perfect, this is the current state of the gaming industry.

There are seven playable factions available in Total War III at launch. Each one has its playstyle, unit rosters, gameplay mechanics, and other details that you will need to know if you want any chance to win. Each faction has its sub-factions with its specialisms and traits. These things must be learned to take control of your starting areas and then complete your campaign.

As I don’t have the time to go into detail about each group, here’s a summary: There’s Kislev. This is where there is a schism between The Orthodoxy and Tzarina Katarin’s Ice Court. To confederate with other groups, your side must gain followers. You must balance the forces Yin/Yang in Cathey to increase the power of your armies, economy and defend the nation against oncoming tribes beyond The Great Bastion.

There are also the daemon factions. Each one represents a Chaos god, each with its mechanics. Nurgle can spread plagues, and Slaanesh may entice others into becoming your vassals. Khorne can get massive boosts from bloodshed across the globe, while Khorne can gain huge increases from the battles. Tzeentch can manipulate other factions to do certain things, such as going to War. The Legions of Chaos is another Chaos Undivided daemon army, which can use all other Chaos factions’ daemons.

All of this is a great way to simplify and condense the details of each one. Each one is more complex than I can convey in my summaries. But I did so because each faction is unique and feature-rich. Given how feature-rich they feel, I’m curious how they will improve upon them in future updates.

AIM OF THE GAMES

As stated previously, each faction aims to obtain the souls of four Daemon Princes. Once you have acquired all four souls, the path to the Soul Forge is revealed. After that, you will need to fight one final battle to win the day. You will need to enter each of the four Realms of Chaos through Rifts, which open every few turns. These Rifts appear in different provinces on the map and spread chaos corruption. They eventually spawn armies that attempt to eliminate any settlements.