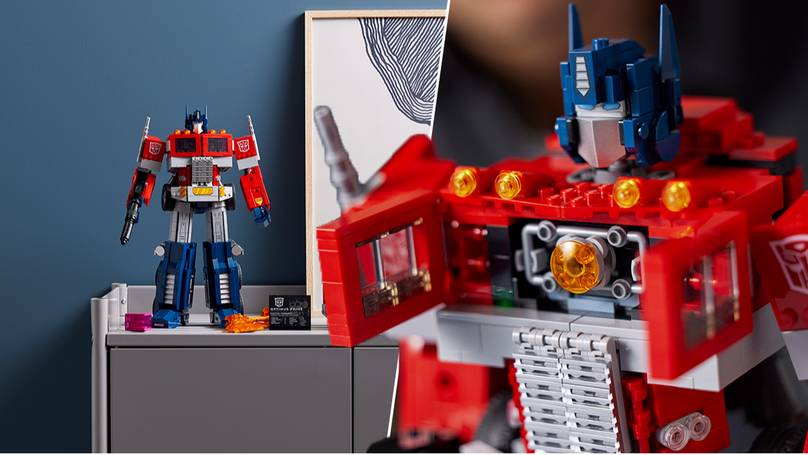 A few years back, you could walk into any toy store and find what appeared to be Lego Transformers on the shelves. Only, this wasn’t actual Lego – they were Kre-O bricks – and the sets were, well, they were fine for kids but of very limited appeal to those of us who remember the warring robots in disguise of the 1980s. Optimus Prime versus Megatron, and all that Jazz… and Soundwave, Starscream, Ironhide, etc.

But this, this, is something else entirely. Lego has revealed a brand-new, fully licensed Transformers Lego set – and of course, it’s a model of the Autobot leader, Optimus Prime, in his ‘G1’ guise. What’s more, it’s a model of Prime that transforms (sorry, converts) without the need to reassemble arms or legs or any of that pulling-bricks-apart lark. Marking the first time that Lego has worked with the Transformers brand, Lego Optimus will be in stores on June 1, priced at £149.99. Which, yes, puts him firmly in the adult-collector bracket of Lego appeal – but this set sure isn’t short on accessories.

Made up of over 1,500 pieces and measuring over 35cm tall in robot mode – putting it above the Masterpiece-level Optimus Prime toys on the market – Lego Optimus has 19 points of articulation and comes complete with his all-important Matrix snugly contained in his chest. Don’t drop it around any hot rods, yeah? He also has his standard blaster, and the Energon Axe featured in the cartoon episode ‘More Than Meets The Eye Part II’ (and never seen again in that show), a purple Energon cube, and the rocket pack Sideswipe gave him that one time, and a display plaque. All that’s missing is his trailer (and Roller), though to be fair, most of us just put that thing in a drawer and forget about it.

Naturally, both Lego and Transformers fans and collectors will wonder if the release of Optimus Prime will be followed by other characters from the 1980s toy phenomenon, which was supported by a series of Marvel comics, a cartoon, and a full-length movie (also produced by Marvel).

While the becomes-a-gun Decepticon leader Megatron almost certainly won’t be a contender, at least in his pistol form, the likes of the cassette recorder Soundwave (with some little tape minions, yes Lego?) and any number of other cars, jets, trucks and the like would be most welcome. And with Lego already doing a multi-part Voltron set, perhaps a combiner like Devastator isn’t out of the question? No breath will be held, but if this Prime is half as good in hand as it looks in pictures, hopefully, it won’t be the last Lego and Transformers crossover.

Advertisement
This Lego Optimus Prime Officially Transforms, and We Need It