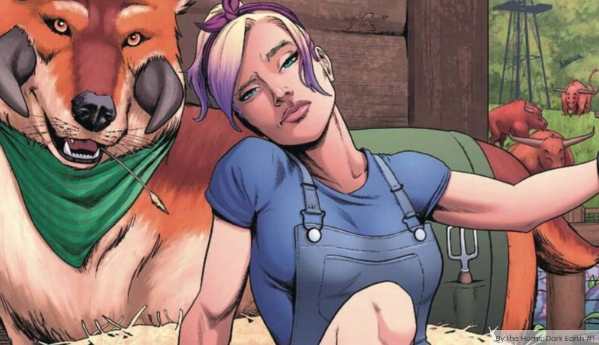 By the Horns #1: Dark Earth Continues Its Powerful Tale Of Adventure and Grief

By the Horns #1: Dark Earth Continues Its Powerful Tale Of Adventure and Grief

By the Horns is the most popular title from Scout Comics, an indie comics publisher. Markesan Naso, the writer, and Jason Muhr, artist/letterer, create a singular vision that pushes the boundaries in SFF originality. They also pay homage to their obvious influences. Scout’s announcement of an extension to the initial maxiseries was no surprise. After a brief gap between the eight-issue trade publication and the reissued continuation, I am happy to report that Dark Earth #1 has received all the attention it deserves.

Muhr and Naso are joined by Steve Canon, a new colorist whose art perfectly matches the visual style displayed.

The creator of By the Horns was able to create a story that began as a revenge-seeking tale. The book is also remarkable for its seamless weave character development into the story. Without feeling heavy-handed, the comic is both character-driven as well as plot-driven. It is a rare feat to propel a story by essential character development, tempered by plot milestones that move the narrative. By the Horns: Dark Earth #1 continues this careful balance act with aplomb.

After months of searching across the Solothus continent, Elodie, her half wolf/half-deer Telepathic companion Sajen and floating eyeball butler Evelyn won an epic battle. Feng Po, the magic-stealing sorceress, was defeated by the team. They combined the horns of unicorns to create a powerful weapon during By the Horns #8. The ragtag team freed the unicorns held captive and destroyed Feng Po’s floating, magic-extracting Augernaut.

It was a glorious battle. You wonder what the story could look like if it were on a grand scale such as this. Elodie must finally get over her grudges against the unicorns that killed her husband to stop a world-ending threat. But by the Horns: Dark Earth #1 promises more of the same elements as the first arc and will increase the stakes for both the new conflict and Elodie’s internal growth.

This issue serves as an interlude. It fills in time gaps and revisits Elodie’s roots. Six months have passed since the events of the eighth issue. By the Horns: Dark Earth #1 is now available. Elodie, Sajen, and Evelyn, their huge eyeball friend Evelyn return to Wayfarer to help their community as farmers. But, the continent is being eroded. The soil is becoming unsuitable for cultivation, the trees are dying, and water is scarce. Elodie is faced with defending Wayfarer’s farms and still suffering from the effects of lethal beast attacks that threaten their livelihood.

Elodie is now the town protectorate. Elodie isn’t content to be a farmer’s wife. We see Elodie take a risk to end the Wayfarer invasions, despite being unwilling to contribute to society. Despite continuing to work through her trauma, Elodie has learned to rely on others instead of being alone in her pain.

The comic is filled with deeper discord as something unknown works to unravel what Elodie thought she had managed. The comic’s final chapter features Elodie and Haru, a village councilman and grandfather who was her husband. Their conversation focuses on the current source of chaos wreaking havoc in Solothus’ ecosystem, not on a mentor dialogue between old friends. Haru speculates that the symbiotic relationship of magic and earth has become fatally flawed, which Elodie believes he can correct. Although we only see the more serious, darker side of Elodie’s and Haru’s relationship, it’s still nice to see that their bond has remained intact despite all their past harm.

Elodie sets Elodie on her next quest with massive repercussions if it fails. To locate ancient magic on an unknown continent, she must find Zoso or Rigby again. Otherwise, Solothus will be extinct. While By the Horns Dark Earth raises the stakes for Elodie’s safety, her confident new character isn’t lacking any. The creators want Elodie to grow, regardless of how she appears. In a moment of intense intimacy, she reveals the burden of her expectations to Shintaro, her coma-induced husband. Dark Earth #1 reminds us that grief has a profound and palpable effect on those suffering from it. Shintaro would be a great companion for Elodie on this journey, as she longs to have the man she loves back.

Elodie is a sucker for Shintaro’s company, no matter how compassionate others may show her. This dynamic has impacted every aspect of Elodie’s life since the beginning. Even this far into her story, there is still a glimpse of hope in Shintaro’s possible revival one day and the visceral effects that his current state has on Elodie. This is why I praise this comic series. Muhr’s fluid artwork and Canon’s vibrant coloring, spliced together with innovative panel layouts, sing during fight scenes. Their illustrations show the psychological layers beneath the adventure-filled fun that makes By the Horns popular.

Although I have said it before, By the Horns is a masterwork. It is filled with relatable characters and themes. The comic also has a world that feels real and concrete. You can find countless monthly comics, but I urge you to get By the Horns monthly. Its small moments serve as a canvas for the pain we all have experienced at some point in our lives.

Advertisement
By the Horns #1: Dark Earth Continues Its Powerful Tale Of Adventure and Grief