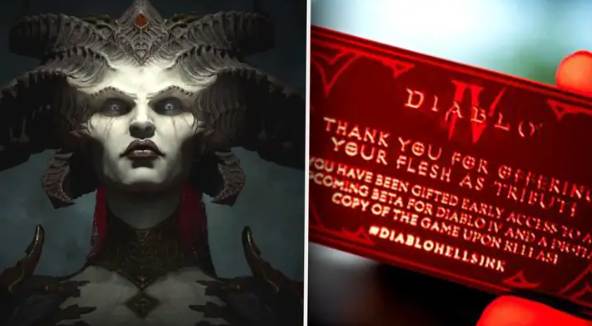 What would you do to get the latest beta version of your favourite franchise? Diablo III fans will need to sign up for permanent ink. Seriously.

The reputation of Blizzard Entertainment is not at its best. In case you didn’t know, Diablo Immortal caused quite a stir when it was revealed that it would cost players PlayStation88,000 to upgrade their characters using in-game progression behind a paywall. It’s possible to wonder if anyone would want the franchise tattooed on their skin, but this is exactly what Diablo fans have signed up for.

Yesterday was the official start of Blizzard Entertainment’s Diablo Hell’s Ink Tour. From 16 July through 10 September, the tour will take you to several cities in the world for one-day only. Los Angeles, Chicago and New York are some of the stops.

Fans have two options: they can either apply for a permanent (and unique) Diablo tattoo or line up on the day. Fans will be able to get beta access to Diablo IV and a digital copy of the game in exchange for permanently inking themselves.

Blizzard Entertainment said, “Diablo players around the globe have turned to tattoos not only to express their love for the franchise but also to share the stories of their family, friends, and the memories they made playing Diablo. We’re launching the Diablo hell’s Ink Tattoo Shop Takeover Tour to honour our community and celebrate Diablo’s 25th Anniversary this year.

They added that each Diablo Hell’s Ink event will feature the best tattoo artists from around the globe creating custom tattoos inspired by the Diablo universe. This will be for a select few Diablo fans. The event is open only to Diablo fans over 18. It is safe to say that I don’t believe the Diablo IV beta will be too crowded for this price.