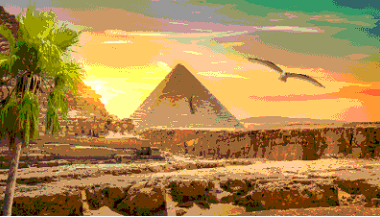 A new desert zone and weapon will soon be available for New World account owners when Brimstone Sands gets released for Amazon Games’ MMO in October 2022.

Amazon Games is set to release Brimstone Sands this October.

Things in New World have been slow. Amazon’s golden child initially had a lot of hype when it was released in September 2021; people thought it would rival and even dethrone World of Warcraft as the most popular MMO. For a while, it was on track to do just that. Instead, New World faced many issues, game-breaking bugs and a lack of endgame content to farm New World coins. The burden was too much to bear, and the game ultimately fell from grace—it wasn’t long before the player count plummeted into oblivion.

Amazon Games is hoping to turn things around with Brimstone Sands. New World’s first major content update adds an Egyptian-themed zone to the land of Aeternum, including a new weapon and player experience.

Brimstone Sands is All About Corruption and Mummies

As we’ve said before, Brimstone Sands adds a desert area, an all-new greatsword weapon, and attempts to revise the early game experience for newbies. It recently hit the PTR (Public Test Realm) on September 1, intending to bring back retired players that used to farm New World items from the fold. The update centers around a large Egyptian kingdom in Aeternum ravaged by a long-forgotten war.

This kingdom now lies in ruins, but they were built to honor god-like ancients on the island many years ago. Shortly after that, the Roman Legion arrived in the area and encountered corruption, which led to them planning the revival of the Roman Empire to its former glory. This is where you come in—you’ll have to fight past the Roman soldiers, sand demons, and a variety of Egyptian foes (which we assume are mummies) to get your hands on some new loot.

With new loots to get, environments to explore, and quests to accomplish, the Brimstone Sands update will keep you busy for the foreseeable future.

The latest update adds the Greatsword to the ever-growing collection of weapons available to you in New World. The Greatsword is a two-handed blade that uses both dexterity and strength, so it should be a perfect fit when slotting the weapon into builds featuring other martial weapons already in New World.

Since it allows you to switch between stances (depending on your circumstances), the Greatsword has an offensive and defensive tree. This will allow the weapon to have DPS and tanking capabilities. The Onslaught tree (offensive) allows you to eliminate enemies before they have the chance to attack you. Meanwhile, the Defiance tree (defensive) focuses on building an aggressive defense, turning you into a tank that can deal heavy damage to multiple enemies around you.

The latest Expedition you can expect for Brimstone Sands is a journey into the Ennead, the giant pyramid floating on top of the new desert region. This Expedition is said to be centered around the relationship between the Roman Legions and the Ancients. Other than that, details regarding the futuristic-looking pyramid are being kept under wraps for now. At the very least, Amazon Games promised that more information would come to light in the next Dev Update.

If you’ve never booted up New World or are thinking of creating a new character, you’ll be intrigued to know that Amazon Games will revamp the early game. According to David Verfaille, New World’s creative director, the quest flow will be streamlined, new challenges and puzzles will be added, and a variety of new additions to start zones to make the overall experience exciting.

With all these new additions, there were still a couple of things that players would have loved to see for the update. During the Q&A segment after Brimstone Sands’ announcement, Amazon Games confirmed that there were no plans for expeditions that allowed a more significant number of players to participate. There will also be no server cap increase or server mergers. Moreover, there were also no plans for a faction control reset. This means that new players jumping into New World for the first time could join a server where one of the three factions in the game has total or majority control of the map.

Will New World Be Relevant in the MMO Again?

The additional features presented for the Brimstone Sands update should keep players interested, like the Greatsword weapon, new quests you can farm New World gold, and the Ennead Expedition. But with many ongoing issues still present in New World, it remains to be seen if the game’s first hefty update has the power to bring back many of the players who retired from the game over the last year.

New World’s Brimstone Sands is scheduled to release in October 2022.