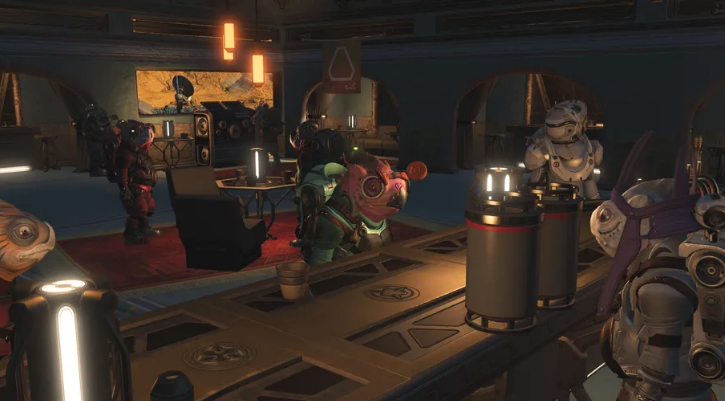 Hello, Games offers No Man’s Sky users another update for Frontiers. This adds planetary settlements and procedurally generated space exploration to the game. Hello Games compares the new settlements with the Star Wars spaceport city Mos Eisley, where intergalactic travellers can meet and grow their communities.

No Man’s Sky‘s newest settlements are small towns with NPC residents, some of which have their own problems. These settlements can be aided and even supervised by players. Overseers can build new buildings, solve citizens’ problems, resolve disputes, and provide security from threats.

You can also meet aliens at a Star Wars-style Cantina.

Base building improvements are also part of settlement building and town management. Hello, Games will introduce a “clean, minimal and contextual HUD” to help players place, scale and rotate base parts and recolour them.

The No Man’s Sky Frontiers trailer has been updated to show off some of the other improvements that will be made in Wednesday’s update. You can also read the complete patch notes below for more details…

Xbox Game Pass gets Final Fantasy 13, Nuclear Throne, and more in September
Apex Legends’ tap-strafing will be patched out soon
To Top