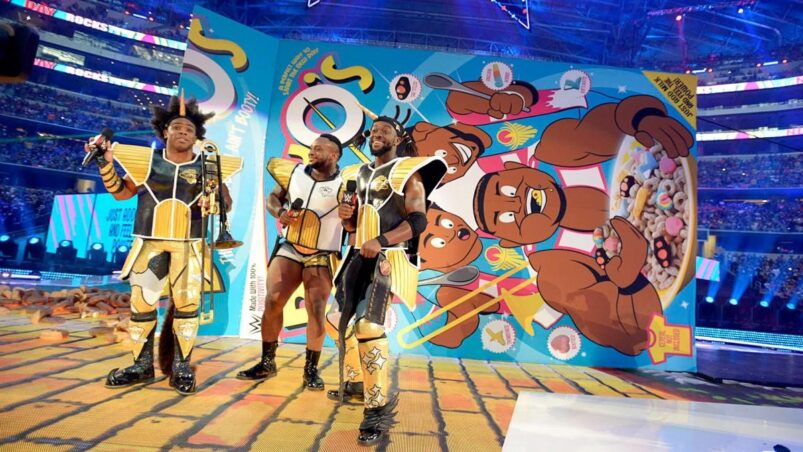 Kofi Kingston and Big E are among the names mentioned. When they were mentioned in 2014, these are the names that wouldn’t have been followed up by the words “headliners.” The creative powers of the world did not give these three young athletes much. Instead, they decided to make them part of The New Day, an evangelist stable. The trio failed to gain momentum at first. Their white meat babyface act was not enough for a crowd already tired of Roman Reigns’ monster push and the absence of new talent.

To change The New Day’s careers, something had to be done. Otherwise, they would likely have been given their pink slips. The three stars decided to take a chance and try to change their gimmick. They turned their hatred into something that fueled their unstoppable climb to the top of this card.

The New Day became one of Monday Night RAW’s most loved featured acts less than six months after their debut. They were Tag Team Champions, and they sold more merchandise than any other star in the company. They were the New Day, and they are here to stay. The fans loved every promo, match, and skit they did.

The New Day established itself as one essential stable in modern times. They put together acclaimed feuds alongside The Usos, The Bar and had a record number of championship wins. This was a rare success story for the tag division. Most partnerships disappear or dissolve within a few years.

As the New Day gimmick became less relevant and the roster grew larger, fans began to suspect that there might be a heel turn and a split. We were wrong. WWE chose to go a different route than the usual and move The New Day into singles. They also gave in to the genuine popularity of Kofi Kingston by booking him into a Wrestlemania marquee match against Daniel Bryan. The story of Kingston’s victory at the WWE Championship was a beautiful one. He became the first African-American champion ever in the company’s history. This was a moment to behold and an example of how far the New Day has come as a group.

Many were concerned at the time about whether Kofi’s success would spread to Big E and Xavier Woods. Kingston enjoyed main-event feuds alongside Randy Orton, Kevin Owens, and others. Although this was not a significant downgrade for other New Day members, it could have been a sign for their respective futures, as Vince McMahon decided to make Kofi’s singles appeal his main focus. We were wrong again.

Now, it’s 2020. After a few injuries, a pandemic in the world, and a split during the annual Draft. Big E, the powerhouse of the trio, was sent to SmackDown Live, where he began to enjoy the singles spotlight Kofi once received. E chose to compete for the Intercontinental Championship and won it on the new year’s Eve episode. This was an incredible moment and should not be underestimated. The fans were thrilled to see Big E win singles, a stark contrast to his 2013 win for the IC title.

Big E was a favorite to win the Men’s 30-man match in Rumble and was viewed as a threat to Roman Reigns Universal Championship. Although this was not to be, Big E would still make it to Wrestlemania in his hometown to defend his title against Apollo Crews. He received a tremendous reception, which was enough to give him a jumpstart into the next stage in his career: the Money in the Bank ladder match as well as a cash-in on Bobby Lashley. Big E and his New Day brothers reached the peak of his rise to the top in 2021.