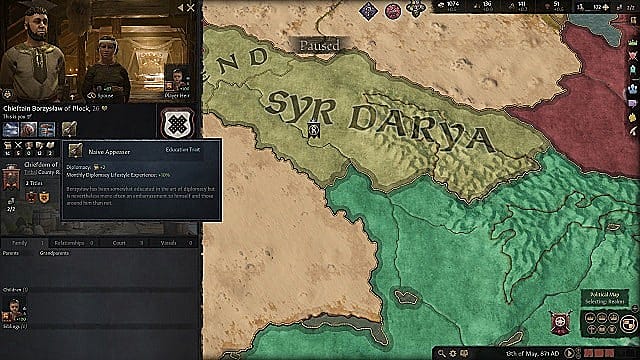 Crusader Kings traits are available in many flavours from various sources. They define a character’s personality and their skills and well-being.

The traits that characters start with are positive and negative. Characters can acquire more traits as they go along, depending on their actions and circumstances.

This guide aims at highlighting the various CK3 Traits. It also gives you a general understanding of why they are important enough to be checked.

You can view any character’s traits by clicking left on their portrait. Look for the row below their name and their skills.

The number of traits that a Crusader Kings 3 Character boasts will depend on how exciting their life has been. Certain Traits can have multiple ranks, which increases their benefits.

They may also be granted access to specific event interactions. An unfriendly character might be rude to another feast-goer because they’re who they are. A Shy character will love you more if your help avoids interfacing with others.

Crusader Kings 3 features three core Personality Traits for each character. These personality traits are Zealous, Gregarious, and Deceitful. They have a direct impact on a character’s abilities and their resource gain and opinions of other characters who have the same Traits.

A Zealous person will be more likely to love fellow zealots while also having an inborn dislike for cynics who don’t value their faith as highly. A trusting person is less likely to fall prey to wicked schemes.

CK3’s Stress mechanism also includes Personality Traits. Stress is caused by acting against your personality. If you don’t have a reason to execute or imprison someone, you will be closer to breaking.

Characters who hit Stress thresholds may develop negative traits such as drinking, brothels, and self-flagellation to soothe their minds. Although CK3 Personality Traits can be moulded in childhood, they will be challenging to adjust to once new rulers take the throne.

As they grow up, each child is given a Childhood Trait. These traits give small bonuses to two out of five skills and suggest the type of education best suits them.

Although you can educate your children in another field, a Childhood Trait with the proper Education focus and a Guardian who excels in the relevant skill can help them receive stronger versions of their Education trait when they reach adulthood.

Your character can influence the traits of your ward if they are guardians.

There are many ranks of Education Traits. They can be tied to any one of the five character abilities. This will increase it by a flat amount and give you an experience boost to Your Lifestyle.

Intricate Webweaver, for example, highlights characters whose education was focused on their Intrigue skill. This makes them better schemers. The Trait gives the character +6 Intrigue, 30% more experience monthly to the Intrigue Lifestyle.

Each Lifestyle tree ends with a Trait. This Trait has a robust positive effect and marks a character’s mastery of their chosen field after years.

Some Characters’ Lifestyles or interactions may grant them Traits. Martial characters can gain a better understanding of various aspects of war by following events that are disguised as practice sessions.

Only offspring can inherit hereditary traits. They are either positive, like Gorgeous and Quick, or negative, like Club-footed and ugly.

Most physical traits are included in this category. If two characters with Congenital Traits have kids, they may pass them on and reinforce them. This could result in more vital Congenital Traits for their offspring, whether positive or negative.

Crusader Kings III’s Health Traits reflect a character’s mental and physical condition. These can range from pregnant to wounded or afflicted with the Black Plague or Lover’s Pox.

This category also includes traits like Melancholic and Lunatic. You’ll do your best to avoid battle, heal yourself with the Court Physician, and pray your Lunacy doesn’t flare up too often.

Fame traits are about the actions and circumstances of a character’s birth. Characters who are Bastards or have muddled family history will be reflected in a trait that influences other characters’ opinions.

Other Fame Traits result from engaging with fun stuff such as adultery, murder or slaying your kin. While you can find other positive traits, your court is more likely to attract adulterers.

Army commanders can benefit from Commander Traits, which give them bonuses for fighting under specific conditions. They are usually obtained through a Martial lifestyle and education, but they can also be given through other means such as events where expert commanders teach others new things.

These traits range from reducing siege time and friendly casualties while protecting to those that grant bonuses when fighting on different terrain types.

Apart from the usual spot, you can always view a commander’s traits in selecting their army. This is located in the lower-left corner.

Crusader Kings III Traits now covered. Check out our other guides on succession and command.

Follow GameWatcher on Twitter to keep up with the latest PC Gaming news. You can also check out our YouTube videos, like us on Facebook and join us on Discord. You may find links to affiliate shops, which earns us a small commission when you buy anything through them. We are grateful.