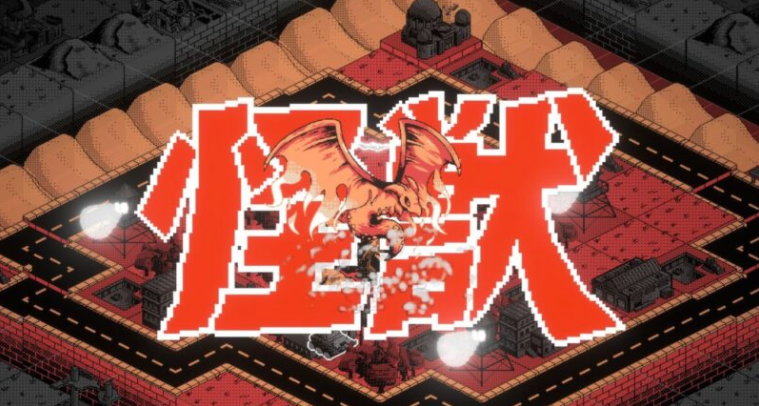 Kaiju Wars, a new turn-based tactics video game, aims to add monster-stomping action into the strategy genre. Foolish Mortals was the original developer of Radio General, a real-time strategy game that featured an immersive voice-command system. Kaiju Wars aims to bring that same innovative spirit to the world of monsters.

I was able to speak with Michael Long, one of the leading developers, and get their thoughts on Kaiju Wars’ development.

What would you say about Kaiju Wars to someone new?
Kaiju Wars is a Godzilla movie where you play the role of a terrible military against an invincible creature. You can fly jets straight into the face of the monster, just like the scenes in the movie. The beast will also step on your tanks and get hurt as if they were Legos. It’s a mix of Advance Wars and Into the Breach. The monster can’t be killed, but it can be slowed down. You have to give it enough time to stop moving around and destroying your city.

What inspired Kaiju Wars?
The original 1954 Godzilla film is our main inspiration. It was humans versus monsters, while the new movies are monsters versus beasts. Movies like Pacific Rim, where humans fight monsters again, are also inspirations. It can’t be the military alone that defeats them. Science must find a way to stop these monsters.

How did the idea for Kaiju Wars come about?
There was an old game called Godzilla 2 War of the Monsters. It was a turn-based strategy for the NES. You played as Godzilla monsters, which appeared in your city and destroyed it. It was not a great game. Although it was a bit janky, the idea was great, and we enjoyed playing it as children.

This idea was never really pursued. Modern Kaiju games are fighting games in which they fight each other. We want to bring back tactical, turn-based Kaiju-ness. You play as humans to defeat the monsters.

My brother created a board game that was based on this idea. You play the role of the mayor, and the monster will come and destroy your city. After playing the game, I thought it was so good that I suggested to Jeff, “Jeff,” that we make the game into a videogame. That way, you don’t need to keep moving the tiny cardboard tokens about on the map. It was designed to allow the monster to move toward the nearest building, and the human must plan around it. Like Into the Breach, you can see where the beast is heading and position your units. Some units should be stepped on, while others you don’t wish to get stepped upon. You will need to plan your city and strategically place buildings. It is possible to use facilities to lure monsters away from your chief scientist working in a laboratory. Once the beast has taken over your city, you will have to evacuate it.

An NES game inspired kaiju Wars. Then we made it aboard, and now it will be a videogame.

Which element or feature is your most proud of?

Into the Breach was one of our biggest inspirations. It shows you what monsters do to your buildings when they attack them. However, in that game, you are fighting multiple monsters. Kaiju allows you only to oppose one or two demons at a given time. We don’t have all the information, so we only show you the monster’s path. If there is a tie between two buildings close to each other, the beast will pick randomly. We also give you the exact percentage chance that the beast will step on each tile. It is essential to consider where your units will be placed. Although you don’t know where your teams will end up, we can give you an idea of the probabilities. While we explain the rules, there is still uncertainty and the possibility that you must workaround. It’s a mixture of Into the Breach’s complete information and a little bit of your guesswork.

Why did your focus shift to a semi-perfect system of information?
It was a board game, so everything had to be simple. It should be easy for players to use the mechanics to move around. The goal is to show the entire game to the user, something that Into the Breach while being a great game, does not quite do. Although it shows you what the monster will do, it doesn’t show how they make their decisions. What is the best way to attack your mech or that building if you move your mech there? I don’t know. The game doesn’t tell you the rules. We aim to give you all the rules in our game.

Can you please explain the Kaiju mutation process?
This is one of the final missions in each area. After attacking your city for a few rounds, the monster will retreat to its lair. When it returns, it gains a new ability. The abilities are somewhat random. They only have a subset of commands that they can use, and they are mighty but easy to understand. Based on the terrain of its home, it is also possible for the monster to return to the same tile. These are more like a battle for attrition. They slowly appear, then blow up buildings and then leave. Slowly your city is destroyed.