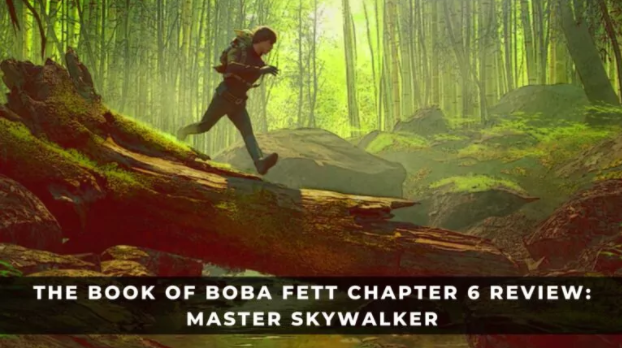 This is the latest episode in this new Star Wars series. It’s by far the best. This The Book of Boba Fettchapter 6 Review explains what makes this episode stand apart from all the others.

The Mandalorian Din Djarin has appeared in two episodes. This is the first step towards Star Wars being a functioning cinematic universe. The production team also created excellent renderings of Cad Bane and Luke Skywalker. Chapter 6 also has great editing, sound, and pacing.

STORY: THE BOOK of BOBA FETT OR The MANDALORIAN?

An arc featuring Din Djarin was started in the last episode. In Mandalorian season 2, he said goodbye to Grogu (Baby Yoda). The previous two episodes of The Book of Boba Fett felt more like the beginning of Season 3 and not a continuation of what the last four episodes had told. This is a refreshing sign that Disney finally embraces Star Wars as a cinematic universe in the same way as Marvel. This means that characters often cross paths in different movies and series. Many Star Wars fans have wanted to see this for a while.

This Din Djarin story arc stretches the boundaries, as Djarin becomes the star of his series. Thor is a movie about Thor. Boba Fett was not even mentioned in chapter 5. He also didn’t appear in chapter 6. However, he did appear briefly in chapter 6 but had no lines. While it’s wonderful to see Star Wars in a cinematic universe like this, Boba Fett should still be the star of his show.

In the Book of Boba Fett, chapter 6 finally shows a dialogue between two characters who have been friends for a while. Long, long ago, Luke Skywalker Ahsoka Tano finally spoke. This was what Star Wars needed to become a cinematic universe. Luke Skywalker had to meet his father’s former apprentice. This would be absurd for these characters not to know one another. Star Wars is now a cinematic universe. Although their dialogue is short, it is still powerful.

Wow, Mark Hamill has aged very well. It’s a digital rendering of Hamill, which animators did a wonderful job creating. Although the staff credits don’t give details about who brought Luke Skywalker to life, they list Scott Lang as a Jedi stunt double and Graham Hamilton as a Jedi performance art. Many people deserve credit for the CGI rendering Luke Skywalker.

Others have commented that Luke’s face is very serious, and his speech sounds unnatural. Luke’s face was always this way, even though Mark Hamill was portraying him. Bad acting has been a problem in the original 6 Star Wars movies. Luke is more like a child discovering Mickey Mouse isn’t real than a man learning that his arch-enemy, his father, in the famous “I am your Father” scene. This episode’s CGI model of Luke captures the role very well.

If one is looking, they will only see the difference in the dialogue. It’s not obvious if one watches the movie without looking. This is a significant improvement on Luke’s CGI model, The Mandalorian, which seemed almost animatronic while speaking.

The highlight of this The Book of Boba Fettchapter6 review is a big surprise. It’s a great live-action debut by Cadbane, a prominent bounty hunter. Many people were surprised to see him die in The Bad Batch. This series was before this one. Although Boba Fett was originally supposed to kill Cad Bane towards the end of The Clone Wars, the plan was abandoned. The scene below would have looked something like the one shown. Many people expected The Bad Batch would continue with the original plan for Cad Bane’s death, as the show is a continuation of The Clone Wars.

This character was created by many production crew members, especially in the visual effects department. His glowing eyes and blue skin look amazing, as do his jagged teeth. Dorian Kingi, a stunt actor, is the on-screen one. The voice actor Corey Burton also portrays the character in The Clone Wars and The Bad Batch. It also voices this role. His voice is excellent, and he’s a great actor. He plays the role of a sci-fi cowboy, confident in his goal.

PACING and EDITING: A SUSPENSEFUL STANDOFF

Editing and pacing are crucial in showing the time passing on the planet where Djarin discovered Luke and Grog. It’s vital to show how two stories are connected—editing and pacing effectively by switching between the storylines at the right places, such as when Djarin lies down.

Cad Bane’s scene is especially well-paced and edited. It builds suspense by slowing down the dialogue that builds up to the shootout. This scene is a western sci-fi standoff, and it works well to alternate between close-ups on faces and guns.

As I mentioned in the previous section, the Cad Bane scene is excellently done. It is suspenseful because of the combination of close-ups and slow dialogue. The sound enhances the experience. As Cad Bane draws his blaster and fires it, the music picks up. This scene is the one many fans hoped to see in the show.

Another great use of cinematography comes when Ashoka takes Din Djarin with him to Luke and Grogu train. They are on top of Djarin’s hill. This is how Grogu is out of reach. The group must let go to become a Jedi.