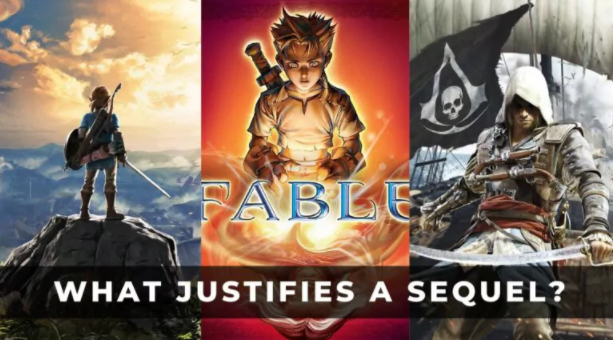 What is the basis for a sequel? They are so popular. Three terms (hard, soft, and golden) have been created that may help explain why games have a second installment. It’s all about money. It is usually true, but there are many reasons to start a series!

What is the justification for a sequel? This is a question I’ve been thinking about for some time. Primarily because I reviewed Tails of Iron, that experience left me feeling something I had not felt in a long time. I was desperate to find another one. This would normally be a feeling that I would move on from. But the gaming industry has a strange relationship with sequels. Too many sequels can destroy a series. The next game may revive it. Too many games in a series can make it a franchise. Although they aren’t necessarily bad, there are some reasons that Sequels might have been made.

This is the easiest reason to make a new entry, and it’s also the most valid. Because the story isn’t over yet, it is necessary to continue. This is also one of the rarer types of videogame sequels. It’s surprising, I know. But think about it for just a second. What number of series titles have you seen that are a continuation of the game’s story? Many games end with a cliffhanger, but they don’t make enough money to warrant a sequel. It’s important to remember that games can be expensive, so it is essential to assure that they will make a profit.

Yet, I don’t recall the last time I played a direct sequel in recent years. It seems that the days of hard sequels are over. I think it makes sense. It’s hard to predict what will succeed with remakes flooding the market and video games becoming more expensive with each technological advancement. Publishers aren’t good at guessing, so we have anthologies and spiritual successors and stories that don’t share the same name. This is the easiest justification, but it’s not the most popular.

A Soft sequel, the more common cousin of the hard sequel, is a game that continues in a parallel world or series but does not directly continue the original’s story. These are your spiritual successors. They include your Zeldas, Marios, and the entire Final Fantasy series. This is why the Fable series is a great example. We are still in the same Albion and will continue to be so in the future. A hard sequel might be the best for players, but publishers will find it much easier to justify a soft sequel.

Soft sequels can be a great way to ensure continued success. Many original entries try to establish a continuation. However, others attempt to close with some closure. This is risky, so it’s better to end the game’s story in its first iteration and create a loosely related title if sales numbers are positive. However, it is not always a good idea. Some of the fascinating results can be achieved by soft sequels.

The Legend of Zelda is an example. This series has one of the most well-known playstyle templates. Consider this: The Legend of Zelda Breath of Wild is a soft follow-up and wouldn’t have been as successful if the Zelda formula hadn’t existed. The same goes for The Legend of Zelda Majora’s Mask. They rebelled and became two of the most beloved, loved entries in the franchise. They broke the Zelda mold and flipped the script. Zelda was a series mostly of soft sequels that weren’t as well-known. They may not even have existed. The Mario RPGs and tons of other franchises are the same. Soft sequels are sometimes good for the series.

Sometimes, they can even be worse. These are what I call “golden sequels.” These are the cash grabs and the whirring from the milking machine attached to a franchise. Fallout76, movie tie-in games, and most of what Ubisoft makes today wear this label. These products are designed to promote technology, capitalize on trends, sell loot boxes, or advertising technology. The “AAA” market is undoubtedly the most popular and least harmful kind of sequel.

Before people start screaming at me, let me tell you. This type of sequel is not difficult to make or poorly designed. For the most part, golden sequels aren’t terrible games. They’re often fine. They are functional and perfect. I had some great times with Far Cry4. Assassin’s Creed Origins wasn’t my favorite, but it does have some great moments. While 2017’s Star Wars Battlefront II is not my favorite, it will probably keep me interested for a while. Golden sequels aren’t necessarily bad. They are just evil.

Loot boxes and Battlefront 2 may be signs of golden sequels.

They aren’t as evil as a bad idea or boss fight. They have a sinister air. They have an underlying sense of manipulation. As if you’re in a dark underground room, and an executive is smiling as they buy a sword with higher numbers, it can be likened to rubbing their hands together. Bad games are okay. Mirror’s Edge was a favorite of mine for many years. Its core idea was horrible! It will be remembered for more than Farcry Primal. We wouldn’t have gotten Titanfall if we hadn’t tried first-person platforming.

There are many reasons to make sequels. Sometimes a story should be told in sections so that you can concentrate on the most important moments. Sometimes the world is not complete. There are more places to explore and people to meet. Sometimes, the original is the best, and the developer should capitalize. While money is the main reason people make “the next thing,” it is not always bad—the Legend of Zelda Breath of Wild, Assassin’s Creed Black Flag. Many titles have improved upon a series, and they wouldn’t exist without the previous games.

Tails of Iron might be worthy of a sequel. It could end up being horrible, or worse, a gold variant. It will never be made so that we won’t know. Remember that a bad sequel does not necessarily mean the end. They are an opportunity to learn from mistakes. While I wouldn’t say I like franchises like Assassin’s Creed, they offer the unique opportunity for a property to change and grow. Although I was not a fan of how the AC games changed over the subsequent installments, it was still better than the new Far Cry game being Far Cry in another place.