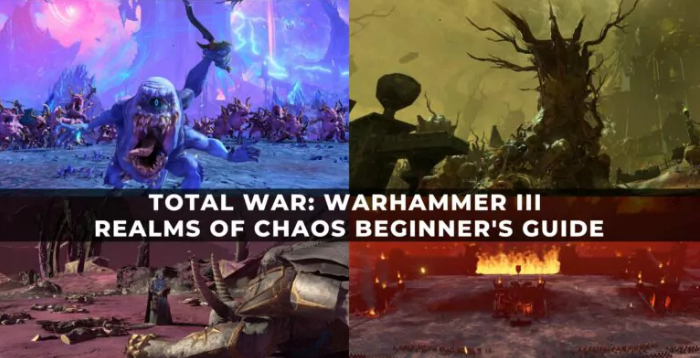 Total War Warhammer III’s Realms of Chaos is one of the most stunning environments in the Total War Series. It can be hard to know your goal for each Realm, despite how beautiful they may appear. It can also be challenging to decide which army to take to defeat the Daemon Princes and armies within each Realm. This beginner’s guide will make it easy!

This Total WarRealms Of Chaos Beginner’s Guide will help you determine your objectives for each Realm and provide strategies to complete them. It also advises on the best armies to bring to defeat the Daemon Princes lurking therein. You will also find tips and tricks to help you win the final battle at The Forge of Souls. Let’s face facts. It’s not fun to see an hour of work go stale because one of these battles is bungled. I know this because it happened several times while writing my review.

BEFORE WE GET STARTED

Creative Assembly may rework Total War III’s Realms Of Chaos within the near future. You might see minor changes or a complete rework. I will do my best to keep this guide current. If there are significant changes, a new guide may be necessary. A disclaimer will be posted if this is the case.

Due to the variety of possible army combinations, I cannot give you complete army lists for each faction. These Realms can be fought in any order, so the units I recommend might not be immediately available. I would spend hours reading this guide. This guide will tell you what daemons are most vulnerable to and what you can do to exploit them. In the coming months, we may have complete directions for each playable faction. If you are looking for more information, keep an eye on the site.

These are general tips that can be applied to all Realms of Chaos. These are the things you should remember before jumping into any of these Realms Of Chaos.

These points are further explained below. It would be best if you built your army for The Realms Of Chaos by building full stacks of the best units possible, supported by a few heroes on and off the battlefield. While you’re in the realms or suffering from attrition, you will almost always be under attack. You need to minimize that damage and make sure you don’t spend too much time in one place.

While the Defenses aren’t a complete waste of money, the towers provide mixed results. Even the lowest tier towers can be valuable and effective early on. Later, however, even the most powerful towers may struggle to be effective. They should support your army. They won’t win a battle for your army. Barricades can be more effective because they can force your enemy to use different routes and slow down their advance.

Your foes will be especially vulnerable to counter-charges and ranged units. I would rather focus on reinforcements and healing than trying to build a great defensive position because I believe the defenses are too expensive for what they offer. Let’s now get to the realms.

The Realm Of Tzeentch may be the most difficult in the game as of this writing. It is not because of the difficulty, but rather because it feels random and easy for the A.I. It takes the least amount of turns to complete. You must travel through a series of portals in order to reach the Impossible Fortress located at the edge of the map. The problem is that you won’t be able to tell which portal leads where when you arrive.

You can show the pairings by leading your army towards one of the glowing points. Also, defeating the Tzeentch Daemon armies will add an extra mark to one of the portals. However, it will not reveal a pair. So I cannot just tell you which route to take. A quick and time-consuming strategy is to take a screenshot of the area or make copies on a notepad. Next, make a note about the locations of the portals. You can then reload the page to the point where you entered the Realm, and you will be able to go through the portals in the correct order. Unfortunately, you cannot rely on following an enemy army’s portals. They don’t follow yours.

WHAT SHOULD I BRING?

The Daemons from the Tzeentch army is made up of many hybrid infantry units that are capable of delivering a lot of fire-based ranged attacks. They are also equipped with powerful spellcasters, flying monsters, and other advanced abilities. They are a very fragile army and don’t do well in melee combat, or situations that require sustained damage. They become far less dangerous when you can stop their ranged attacks. This is why I recommend:

Tzeentch’s missile units can be more effective than standard options like Armoured Kossars or Gnobblar Trappers. It is best to use them to support your troops (as in the case of the Trappers), or to switch to their melee stance as with Armoured Kossars.

The Realm of Khorne, which is the easiest of the Realms in this Total War Realms Of Chaos Beginner’s Guide, is the most straightforward. You will see a bar above your army when you first arrive. To reach Daemon Prince you will need to fill this bar with your army. Other armies within the Realm may also be spawned. There are two options.