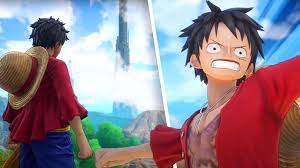 I don’t know if you like it, but I love a good RPG. There’s nothing I love more than being able to escape into a fantasy world filled with fun characters and discovering secrets while following the world-saving, slightly dramatic plot. Unfortunately, most of these stories can be quite lengthy, and you may need to spend weeks on them.

It is certain that the One Piece RPG, as announced recently, will be very similar. One Piece Odyssey, developed by ILCA (the same team that created Shining Pearl and Pokemon Brilliant Diamond), will be released this year to celebrate the series’ 25th anniversary. It looks fantastic – though fans will understand why it’ll look chunky.

One Piece is a well-known series. It began in 1997, hence the 25th anniversary. 101 volumes later, it’s still not over. Predictably, the anime has accumulated 1,013 episodes since its debut in 1999. It is clearly far from finished. It is somewhat frightening that Odyssey will attempt to match this level.

“This project has been in development for many years to allow fans to experience the world of One Piece[.] truly. Now it is finally ready to be revealed!” Bandai Namco posted on the website that this new RPG features new monster and character designs by Eiichiro Oda, the author of One Piece. Motoi Sakuraba’s beautiful music is also part of the game. He is well-known for his contributions to videogames such as Dark Souls and Tales.

If you aren’t familiar with the series, and it would be a lot of effort to get started, let’s say that it would be difficult. Katsuaki Tsuzuki (the game’s producer) stated that he hopes to deliver “an epic drama adventure of Straw Hats that both One Piece and JRPG lovers can experience and enjoy”. It should be fun, provided you are a fan.