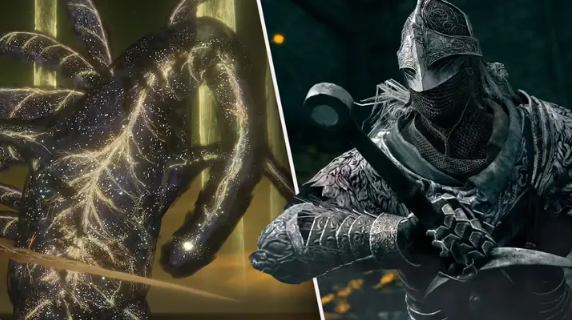 We haven’t been here in a while with the latest Elden Ring run. Did you think Elden Ring players were out of ideas? You are wrong, friends! We’re back with another ridiculous feat.

While Elden Ring is a worthy achievement, some players deserve to be in the soul-like halls of fame. There are many legends, from the blindfolded speedrunner who beat the game’s bosses to the legendary player who used only a Dance Dance Revolution mat to defeat the Elden Ring’s worst boss.

One such player is LilAggy, a Twitch streamer. He’s defeated all 165 bosses within 10 hours before later lowering it to just eight hours. LilAggy tried to run a flawless, no-hit race until his internet was cut out. Talk about pain! LilAggy is now done with a run in which every boss fight was modded to become the Elden Beast.

We all fear the possibility of having to face the Elden Beast. Do you hate the thought of having to do it repeatedly? Nah, I’m good. LilAggy, on the other side, took on the challenge and completed Elden Ring in just 16 hours. That’s 16 hours, 16 minutes, and 39 seconds.

He spoke about the run and said, “Did you doubt it was possible when you first started?” No. There were moments when I felt like, “This is a little harder than I expected,” but there was always a way out.” I love his optimism. What do you think the streamer should do next? An all Radagon run? All Malenia run? There are many options.

Meet Lechonk, Pokemon Scarlett and Violet, Who Have Spwned a Meme Sensation.
Amazon’s The Lord Of The Rings Show Already Maps Out Huge Numbers Of Seasons
To Top