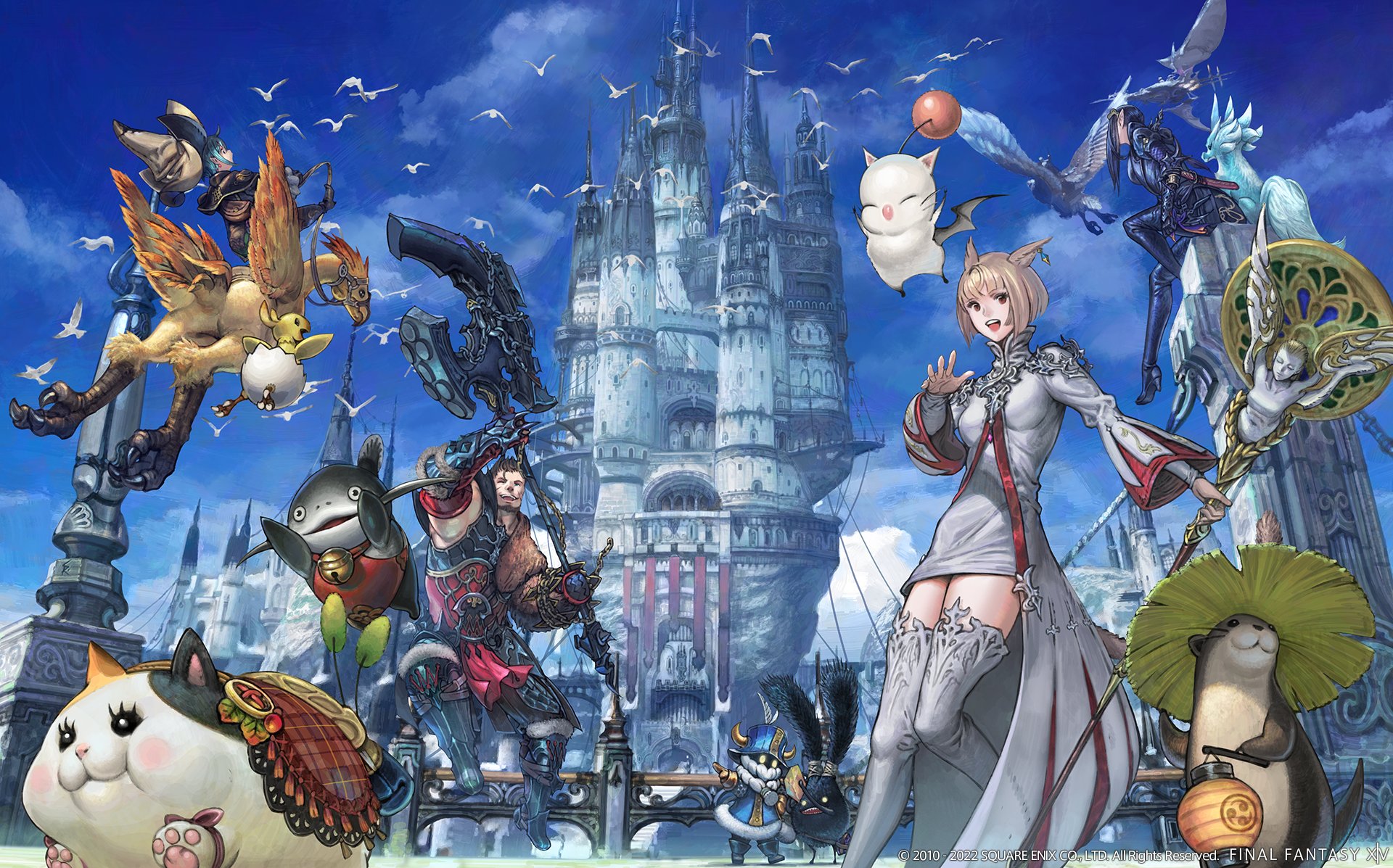 The most straightforward approach is to choose your initial role in FFXIV; you can be a rugged tank, a supportive healer, or a strong DPS (damage per second). If you choose a DPS position, you will have three options: melee DPS, physical ranged DPS or magical ranged DPS. Tanks and Healers are significantly more in demand owing to the weight placed on their shoulders, yet it is worth opting for these positions to get into dungeons much faster.

The most complex decisions begin once you decide on your favorite role in this MMO game. So sit back, relax, and let our helpful guide lead you through the most challenging decision you’ll make today: selecting an FFXIV class.

Here are all the FFXIV classes:

Tanks act as shields for the rest of the party. They have a high HP, defense, and talents that draw the enemy’s attention.

The Paladin shields and uses holy magic to protect the group. They may also use their MP pool to heal allies and inflict burst damage. The Paladin profession is a fantastic starting point for tanking, but it may be challenging to perfect.

To become a Paladin, you must complete the Gladiator introductory class tasks. To begin, go to Ul’dah – Steps of Thal (X 9.2 Y 11.7) and talk with Lulutsu. At level 30, you can become a Paladin.

Warriors have several self-healing skills, do good damage, and can effectively draw in groups of adversaries. The Warrior profession is a fantastic choice for those who have tried a DPS FFXIV class and want to try tanking.

To become a Warrior, you must complete the Marauder introductory class tasks. To begin, go to Limsa Lominsa Upper Decks (X 11.0 Y 6.3) and talk with Blauthota. At level 30, you can become a Warrior.

The Dark Knight wields the power of darkness and possesses the game’s most robust damage mitigation ability. To be a competent Dark Knight, you must manage your mana and blood consumption efficiently, which may be challenging in the fight.

The Dark Knight has no starting class. However, you must be level 50 as a Disciple of War or Magic before you may apply. To begin your journey as a Dark Knight, go to The Pillars (X 13.2 Y 8.8) and talk with the Ishgardian Citizen.

Gunbreakers will undoubtedly appeal to fans of Squall from Final Fantasy 8. The Gunbreaker profession offers a simple playstyle with powerful combinations that can enhance damage or produce shields.

The Gunbreaker, like the Dark Knight, does not have a starting class, but you must at least be level 60 as a Disciple of War or Magic before you may take up the task. To begin, go to New Gridania (X 11.5 Y 11.9) and talk with Gods’ Quiver Bow.

Depending on how successfully they execute their job, healers keep the squad alive or bring them back to life. Healers can also do minimal harm while healing.

The Scholar calls fairies to aid in healing and providing shields for the group. Looking after yourself might make mastering the Scholar profession more challenging, but they can do high damage while healing and are vital members of the squad when employed appropriately.

If you think of a healer in Final Fantasy, the first job that springs to mind is usually White Mage. They have incredible healing power as well as some fantastic over-time regeneration spells. The White Mage profession is straightforward to learn and can even assist with DPS if necessary.

The Astrologian heals and shields the group with magic, and employs cards to empower comrades. This FFXIV class has two stances: one for party shielding and the other for rapid healing.

The Sage is a healer that employs detachable Aether-infused Nouliths to help comrades in battle by healing, boosting, or shielding the group with barriers.

The Sage profession may also utilize Aether to control Nouliths in battle and temporarily enhance their magical skills.

Melee DPS professions put you in close quarters with your adversaries. While the tank distracts the enemy and the healer keeps you alive, you may do colossal damage.

The monk deal a lot of damage while buffing the rest of the team. To become an influential Monk, you must master your move rotation, but with practice, they may have some of the most significant DPS on the team. It’s worth mentioning that the Monk’s function will be revitalized with Patch 5.4, which will be released in early December.

Dragoons are well-known for their strong leap attacks and usually colorful personalities. They provide comparable damage to most DPS classes but are often slower. Dragoon is a difficult skill to perfect, but you’ll look great jumping into battle.

To become a Dragoon, you must complete the Lancer introductory class tasks. To begin, go to Old Gridania (X 14.1 Y 5.8) and talk with Jillian. At level 30, you can become a Dragoon.

Ninjas employ ninjutsu to accomplish swift and robust combinations. They may also inflict several debuffs on foes, increasing the group’s damage output. However, because the Ninja relies on debuffs, they have lower DPS than other occupations when employed incorrectly. It’s worth mentioning that, due to the rapid speed of some Ninja techniques, it may be more challenging to play with high latency than with other classes.

To become a Ninja, you must complete the Rogue introductory class tasks. To begin, go to Limsa Lominsa Lower Decks (X 8.1 Y 16.1) and talk with Lonwoerd. At level 30, you can become a Rogue.

The Samurai has the most DPS in the game, but no helpful quirks aid the party in battle. It is tough to keep a Samurai alive without the assistance of a group. Therefore solo questing might be challenging.

The Samurai has no base class. However, you must be level 50 as a Disciple of War or Magic before you may try out for the position. To become a Samurai, go to Ul’dah – Nald’s Steps (X 9.2 Y 9.1) and talk with the Ul’dahn Citizen.

The Reaper can also call an avatar from the Void to assist in these close-range engagements and can even become a host for the avatar themselves, gaining a ‘brutal, flashy combat style.

Step back from the action and utilize different magic to inflict massive harm on your opponent. Ranged Magical DPS has restricted mobility because you cannot move while casting.

The Summoner can summon one of three battle-pets to aid them in combat, including some adorable Carbuncle from earlier Final Fantasy games. Summoners may deliver significant damage to single targets, while battle-pets assist in buffing teammates. The Summoner may even restore fallen companions during combat if necessary.

The Red Mage, one of the most balanced occupations in FFXIV, can employ black or white spells and weaponry successfully. They deal less damage than other DPS classes due to their long casting time, but they compensate for it with variety.

The Red Mage has no base class. However, you must be level 50 as a Disciple of War or Magic before you may try out for the position. To begin your journey as a Red Mage, go to Ul’dah – Steps of Thal (X 14.1 Y 11.7) and talk with the Distraught Lass.

The Blue Mage is exclusively intended for solo play and can only reach level 60; however, this will be increased to 70 with Patch 5.4. Blue Mages may employ various spells and even duplicate the skills of defeated adversaries. To help you determine if this single-player-only character is for you, we offer detailed guidelines on unlocking the Blue Mage and which spells they may employ.

Like Ranged Magical DPS jobs, Ranged Physical DPS occupations keep you out of the action. They are, however, far more mobile since they are not hampered by sluggish casting.

To become a Bard, you must complete the Archer introductory class tasks. To begin, go to New Gridania (X 15.2 Y 12.1) and talk with Athelyna. At level 30, you can become a Bard.

The Bard specializes in assisting the team with damage boosts and using music to alleviate enemy debuffs on players. Unfortunately, the Bard has a poor damage output, but the ability to raise the strength of the party makes the Bard worthwhile under challenging situations.

The Machinist utilizes a gun and turrets to destroy adversaries. Playing the Machinist successfully entails efficiently filling the Heat and Battery gauges to do significant damage.

The Machinist has no foundation class. However, you must be level 50 as a Disciple of War or Magic before you may apply. To become a Machinist, go to Foundation (X 8.1 Y 10.1) and talk with Stephanivien.

The Dancer is a DPS and support role that is well-balanced. If the idea of dancing about the field and aiding your comrades appeals to you, we have a detailed FFXIV Dancer profession guide to help you out.

The Dancer has no base class. However, you must be level 60 as a Disciple of War or Magic before you may try out for the position. To begin your journey as a Dancer, go to Limsa Lominsa Lower Decks (X 9.8 Y 12.0) and chat with the Eager Lominsan.