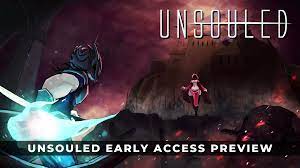 When Unsouled was released, I was sold. Although the game draws inspiration from many great games, it is very similar to Hyper Light Drifter. Unsouled was fast-paced, precise, hack-and-slash combat that made it stand out from all the other demos I have played. It has the potential to be amazing. It is currently in early access and was developed by one person. Is the game living up to its potential or not? Is there more to this game?

Unsouled is available for early access to get your regional pricing.

Unsouled lets you play the role of the fallen prince Maras. An undead army has overthrown his kingdom under the command of a mysterious necromancer. A special ability allows you to communicate with the dead and absorb their souls. You will meet people from your past throughout the levels. Maras’ motivations are not clear. Does he want to defeat the undead to regain his kingdom? Or does he want to face the necromancer? We know we have to defeat the undead to learn more.

Unsouled has an early access version, so, understandably, the story doesn’t have a fully-developed ending. Although the story is good enough to give us some context, it doesn’t offer much in memorable moments. For me, Unsouled was not its story. It was its gameplay that was the main draw.

Maras absorb their souls. You know you want to

I am not a stranger to challenging games. I enjoy many of them. M Metroid Dread E.M.M.I.s was hard to overcome, but it was a good feeling to do so. When it comes to difficulty, there is always a fine line. A difficult game is usually good because it gives you the feeling of skill/improvement and punishment and reward. Unsouled is not a great game in its current early access.

The primary mechanic in the Unsouled’scombat system is the chaining mechanic. There is a way for you to link almost any combat action into another. You can also do a variety of other combat actions, which can be combined into one another. You can create almost unlimited combinations by not being restricted to a single attack.

You can also choose different combos depending on the situation. This allows for fluid movement and combat. You were focusing on one enemy, and now you have many. To finish them all, push them all back and sprint towards one. Are long-range enemies spread far apart? You can stun one enemy with a powerful attack and then sprint to the other, countering their projectiles as you go. This complex combat system works great when combined with a simple chain.

The timing of the chains is where this goes wrong. There’s a specific timing for when you need to press the next button to chain your combos. If you wait too long, your move will not recover, and you may lose your chain. It is difficult to determine the timing of the move without visual or audio cues. It is impossible to know the timings accurately without either feeling it or pressing the buttons repeatedly, which I often did. It made combat less satisfying as I felt like I hit counters and chains mostly by luck, not skill.

There are many upgrades available as the game progresses. For better stamina or damage management, you can upgrade each combat action. You can upgrade your abilities by using the souls you receive from fallen enemies or corpses. Bosses can also drop a unique soul, which allows you to use active abilities such as creating poison clouds, shooting lightning bolts, or even temporary invincibility.