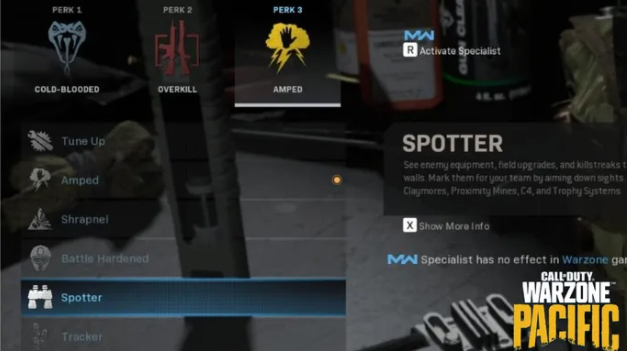 Season 1 Reloaded in Warzone Pacific is now underway. As players continue to drop into Caldera, Raven Software has made many bug fixes to ensure a smooth gaming experience.

In addition to the Welgun and arrival of Isabella Perks, keen-eyed players noticed a subtle change to one Perk that was not listed in the patch notes. Some players might not have seen the changes due to the slightly stale Perk meta in a battle royale.

Reddit user Cream_Shpee noticed the change and noted that Spotter had been renamed, Engineer. However, the player claimed that the Perks meta was so outdated that unnoticed.

Engineer Perk, as it is now known, is not a Perk that often features due to Combat Scout and Amped dominating the Perk 3 slot. Although a name change isn’t the most important of changes, the fact that hardly anyone noticed it is pretty amusing. One commenter stated that you could get rid of 70% of Warzone Perks without anyone noticing. This is likely true.

Raven Software’s decision to change Spotter’s name to Engineer is unclear, particularly since the Perk has the same functions. Although this small change could open the door to further modifications to Warzone’s Perks, the developer still has more significant issues to resolve before focusing on Perks.

You can find more Warzone intelligence by visiting the Attack on Titan crossroad and the best Welgun loadout.

AEW File For ‘New Age Outlaws’ Trademark
DYING LIGHT 2: CROSSPLAY – WHAT DO YOU NEED TO KNOW ABOUT SUPPORT FOR CROSS-PLATFORM SUPPORT?
To Top