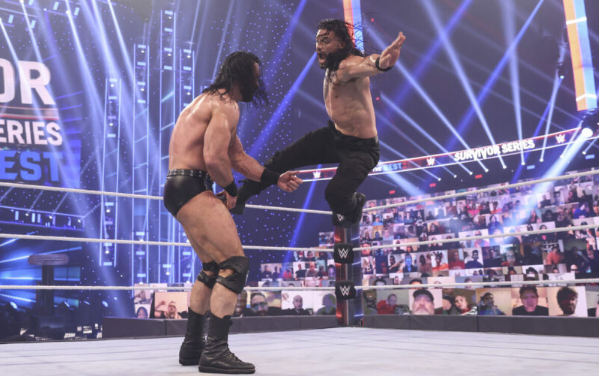 Official Backstage Program for WWE Clash at The Castle

Official Backstage Program for WWE Clash at The Castle

reports have revealed that the main event for the UK’s first stadium event since over 30 years ago has been set up backstage. Producers indicated that Roman Reigns will defend his WWE Undisputed Universal Championship against Drew McIntyre from Scotland on the show’s marquee main stage.

Drew McIntyre is prominently featured in the promotional material for the event in Cardiff. He’s front-and-center on the show poster. This suggests that the build-up to Clash at the Castle will be centered on him and his pursuit of the largest championship on the card.

Dave Meltzer also said that plans could change depending on Tyson Fury’s involvement. If Fury keeps his promise to return to WWE for a match in Principality Stadium, Drew and he could headline [email protected] Castle instead of Drew/Roman.

Apart from that, little else has been ruminated about the Cardiff show, except for marketing material that revealed the inclusion of Cody Rhodes, Edge, Becky Lynch, and Cody Rhodes on the card.

Currently, ticket sales are at around 30,000. This is a significant deficit when compared to the expected figures of more than 85,000. These numbers could increase quickly, however, with general ticket sales opening up.

Clash at Castle is broadcast from Principality Stadium in Cardiff, Wales on September 3rd.

Advertisement
Official Backstage Program for WWE Clash at The Castle

FFXIV Patch 6.2 Release Date – HERE’S WHEN IT CAN LAUNCH
Eiyuden Chronicle – Rising Is A Great RPG to Chill Out With
To Top